A downloadable Pixel Session for Windows, macOS, and Linux

In case it is unclear from the look of this page,
please do not buy this if you are prone to epilepsy seizures.

GET DEEP INTO DESCENT

GET LIGHTNING IN LIGHTNER

GET WATCHED BY B1G BR0TH3R

GET CLONES IN CHARGING PANIC

GET BURSTING WITH CHROMA CANNON

Each game is based on one simple but special gameplay mechanic and built around this mechanic. With a focus on visual feedback, the five games are fine examples of colorful video game juiciness.

The results are five eye-candy arcadey games that will have you say "ok just one more time" a lot of times.

About the creator of Pixel Session Vol.1

TRASEVOL_DOG is an indie game developer who enjoys finding and trying new gameplay mechanics. Eternal prototyper, gamejamer and "Twitter Treasure", TRASEVOL_DOG is in love with 2D graphics and provides his audience with much color, going from concept to next concept, like a gif machine mostly fueled by passion and sugar.

He is also one very active Pico-8 developer, constantly exploring the visual possibilities of the restrictive fantasy console by Lexaloffle. From colorful procgen experiments to trippy programs fitting in a tweet or in a 120 seconds gif to actual games such as HIGH CLIMB or the five in Pixel Session Vol.1.

You can check out his Twitter here. He does a lot of stuff you can enjoy for free too!

In order to download this Pixel Session you must purchase it at or above the minimum price of $3 USD. You will get access to the following files:

So in Descent, if you hold Z and X to start the game… and continue holding them… you get a high score by mistake. Edit: But only if you press them at the same time.

While I lost my temper once or twice at Big Brother, it was Charging Panic that really soured me on the entire experience.

the first 3 games are a lot of fun! because of charging panic I haven't been able to see the last one but it looks fun!

This is great so far, but how are you supposed to get points in b1g_br0th3r? I really love the art style!

Hey, thank you! In b1g_br0th3r you have to touch the green words and keep on avoiding the death rays. I think a lot of people see this one as the most difficult game of the 5, my advice is to focus on the rhythm of the death rays to avoid them more easily. :)

I have just purchased this, but unfortunately it seems that the html files are not present any more. Any chance you could add them back?

Done! But I'm curious now, why do you want it? I removed it because it had issues with some browsers, and the executables are just better for performance and input-latency and general immersion anyway.
Anyway, I added the old zip file back, you'll find it with the other downloads.

It was pretty good, a little tough though

Can you help please? How do I unlock the other mini games?

Hi, you get the password for every next game by scoring a B rank on each game. So if you achieve the B rank on Descent, you'll see the password to unlock the game2 zip file. Alternatively, the passwords can be found inside the "cheatcodes" text file. I hope that helps!

OK, thanks. I was playing using the itch app, so I didn't see there were these other files. Thanks.

Overall: 9/10 While the gameplay wasnt revolutionary I dont think its about that. If you want simple, adictive minigames with gorgeous art then this is perfect for you. It knows how to be simple, fun, and jump from one idea to another when its getting stale. My only big problem was with Charging Panic, but thats just personal. Oh, and the final reward was cool.

I played this from the BLM bundle and really enjoyed it! Wonderful idea! Great art style and gameplay!

There were issues with the games on certain browsers, so I updated them and made them standalone executables! (that wasn't an option back when I released the game, but it is now)

It may also improve performances, which is cool. In the games you can pause and access settings by pressing ENTER.

Thank you for checking out my games everyone, I hope you enjoy!

A nice project, a collection of funny, psychedelic arcade minigames quite challenging but not too hard, usually. Also, a great idea the system to unlock the minigames, it gives you the right stimulus to fight the battles in the games!

No sound when playing on windows 10/chrome browser. Is that how it's supposed to be, or should I start troubleshooting?

Hi, thanks for trying it out! The games all should have audio, but indeed I just tried and no audio comes out on chrome. Works fine with Firefox though.

I'll update the games to the latest version of Pico-8 (the engine) and hopefully that will solve it. Thanks for the report!

Thank you! I'll use Firefox for now :)

Can you please make the source available? I can't play them with the .html for some reason.

This was awesome! Hoping for part two soon :D

All I'm gonna say is that I LOVED this experience, and volume2 when?

Hey dude, I really admire the art on this!! It's strange but definitely eye catching. Which game engine did you make this from?

Not OP, but the game engine is called Pico 8. (Hope that helps)

how do i get access to all of the games?

Hi, iin the game folder, you'll find a "CHEATCODES-DONT.txt" file. That file contains the passwords for all the zip files containing the games. Just unpack them and enjoy. :)

Was this made with pico-8? If so, any chance you could make the cart file available?

This was made in Pico-8 yes, but sorry I have no plans to make available the source of the games for now. 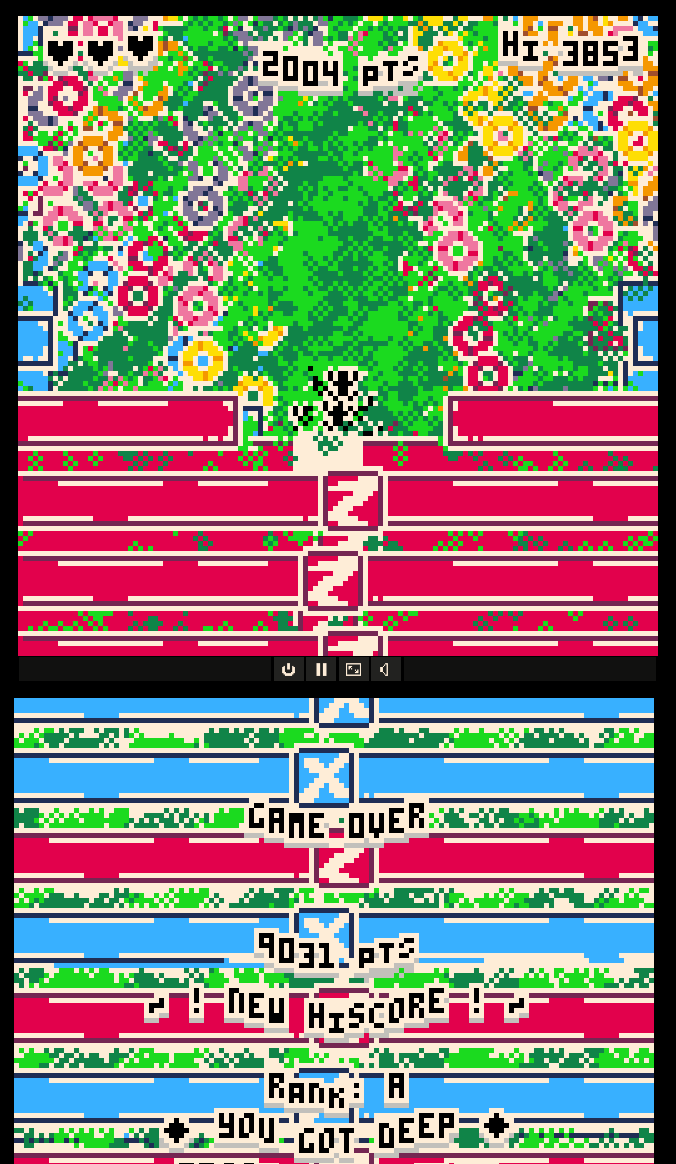 Nice, but isnt there any source code in the package ?

Heh, I have to say, the method you used for unlocking games is very clever! :) As for the five games themselves, they were pretty easy to pick up and hard to put down. >w< I really enjoyed the journey through all of them (even when I had a bit of trouble trying to get a B rank in Big Brother and Charging Panic, I just cracked under pressure a lot, haha), the graphics and music were beautiful , and it was all done in Pico-8?

Simply amazing. I can't wait for volume 2 (if there's one on the way)! OUO

This kind of experimentation, coupled with genuine gameplay not only encourages me to invest time in Pico8, it pushes boundaries and concepts not unlike various periods and artists in Jazz. Fun and important.

I'm up to the fourth game and am really enjoying this so far! Descent was simple enough; definitely the most traditional of the games in this Session, but still unique enough to have a cool twist. It's super fun to go back to and play after the others, which are much weirder.

Lightner is the slowest and so far most unique of the bunch. It almost feels like a strategy game! This one is perfectly-paced for me; I like a game that wants me to react fast, but not super-crazy-split-second fast. Make me think a little too! A lot of the challenge in Lightner comes from wanting to go through it faster than you need to; in fact, that's indicative of one thing I really like about all the games in this collection, which is that the fail state isn't just a matter of having time run out or hitting a wall and suddenly failing, it's usually an amalgamation of stuff happening on the screen that leads to you get overwhelmed and losing. Lightner does end up being waaay easier than all the others though; I got an A rank in like three tries!

Big Brother has the coolest presentation so far. It's more "interesting" to play than it is fun to play. Mechanically, it's not super unique (Descent is better!); the interesting-ness comes from figuring out how to play it while being absorbed in its opressing atmosphere. My complaint with this one is that Level 2 seems to be harder than the later levels (maybe it's just me!), but either way, definitely a cool thing. Learning how to see the lasers of death was a cool experience. ("Cool!" "Interesting!" Cool and interesting! Everything is cool and interesting!)

Charging Panis is definitely the one I've found most difficult. I feel like I haven't "solved" it yet; when the buttons are too close to the edge of the screen, there doesn't seem to be a whole lot I can do to prevent the balls of death from killing my clones. I think the secret is ensuring that there's always at least one clone on each group of buttons and then focusing on pressing one at a time, but I can't quite get the rhythm down between defending existing clones and spawning new ones for unpressed buttons.

Definitely gonna play more of this! Awesome game, thanks for making it!!

The gameplay screens have been added! :)

It would be more sensible to put the titles and gifs together, rather than a series of title screens followed by a series of gameplay gifs.