Help this game reach its goal

A downloadable game for Windows

Notable Flying Typing companion (NFTc) is a desktop pet that wanders around your desktop on top of other applications, and reacts to key strokes. It is intended to be left running in the foreground while you work on other things and use your keyboard as you usually do.

(for security concerns, it doesn't actually read what characters you're typing, it only reacts when you press *anything* on your keyboard + the program does not connect to the internet in any way)

You can change the scale of the program at any time by right clicking on the UFO and using the scale slider.

This is a crowdfunding campaign!! Buy the game and contribute to unlocking the next typing reaction effects:

By paying 25$ yourself, you become a certified buyer, your name will be added to the game and I will send you an authentic certificate with a unique code*. Plus, you get access to the secret.zip file.

*the unique code does nothing.

Here are some answers to your anticipated questions:

Q: What's going on here? Why the weird title?

A: This whole thing is a joke on NFTs, a disastrously capitalistic technological trend that has gained some popularity and a lot of justified controversy over the last few weeks. (it's a pyramid scheme that destroys the environment)

A: I took the joke too far!! I spent too much time on it and now I need to make this project pay for itself. So, I decided to crowdfund it!

A: Yes! The project is pretty much done as it is, but you will have to unlock most of it, collectively. For each step that we get to in the crowdfunding, I will update the game, unlocking a new effect.

Q: Does the unlocking happen automatically?

A: Not really! I'm updating the game manually whenever I notice a step was passed. Expect a 1-24 hours delay at worst. I recommend using the itch.io game launcher so that the game updates itself automatically whenever I put out a new version.

Q: What happens when the crowdfunding reaches its final goal?

A: The game shall become free forevermore and I will remove the option to become a certified buyer.

Q: What if the crowdfunding doesn't reach its goal?

Q: Does the money go to a good cause?

A: Yes, It should be! The desktop pet should remain in the foreground whatever else you are doing, unless the software in focus will not allow anything to be displayed on top of it. (rare)

Q: Can I use this desktop pet as a streaming overlay?

Thank you to Davemakes who inspired this whole thing with their project KnFT. I even went so far as to steal their project's description format. Hope you don't mind davemakes, love ya!

Thank you to our beautiful certified buyers: (these are the names they have chosen to be listed as)
Dr Jon, Gruber, "Rémy Devaux", Captain Drakken,  [your name could go here]

In order to download this game you must purchase it at or above the minimum price of $2.01 USD. You will get access to the following files:

Oh no, after an engine update today, Malwarebytes thinks NFTc.exe is a "Malware.SandBox.11" and wants to Quarantine it.

VirusTotal has 65 vendors saying its safe.

[randomly shoots out confetti and tiny versions of self]

on a multimonitor setup, is it possible to drag the ufo to another screen or does it only work on the screen you have selected as the main desktop? cheers. Im using windows 10 lol

it will only work on the one screen, but you can choose which! when you launch the program, a small "SUGAR" window will appear with the engine's boot-up animation, you'll just have to    drag this small window to the monitor where you want the UFO to reside, before the animation ends.

ayy thanks so much Mr. Devaux <3.  play 140 by jeppe carlsen ! :)
also do you have any other computer pet recommendations by any chance lol?

and 2) lastly is there a way i can make the default scale of the pet times x1 when it opens? thank you!

this is the best collection of desktop pets and other companions that I know of: https://itch.io/c/733669/desktop-pets-virtual-companions

Next time I update NFTc I can make it so that it remembers what scale you were using the last time you used it. :)

Hi again! It's been a few months but I just updated NFTc and I made it so it would save the scale you're using for the next time it opens!

Just wondering, is there anyway to turn the effects off? :D

Hi, I'm super late but going to answer anyway. There isn't any way to turn the effects off currently but I may add one in the next update when we reach 350$. :)

Hi again! It's been a while but I just added a way to turn the effects off in the UFO's menu in the new update. The setting will be saved for the next time you launch the program too. :)

how did you make this program in 1MB?? what is it coded in?

ahah, this was made with my own engine, SUGAR! no bloat there, for sure! ^^

it's not available yet but   you can learn more about SUGAR  here: trasevol-dog.itch.io/sugar :)

that's incredible! i'll definitely keep up with the development of sugar. ive desperately needed that sort of thing for a while i think

This is such a clever idea. Nice work.

what if its a web extention for free?

can it also be for the web browser too?

Yes, it works with all web browsers on Windows! :)

and this ufo seems nice

dear remy , this is a good joke and I also appreciate what you got into with disctop. will you push further into desktop pets? the sensitivity of a cursor toy is a delicate thing. I want to be able to throw down a fiddle on any part of my display and strum it idly... In a sense I think idiosyncratic little desktop sprites are the final promise of the 500+ Cursor Smiley Set Toolbar. I wonder if I could find some software on that order still available...

dear qis, I'm glad you appreciate the joke! yes I do intend on making more desktop pets in the future with different ideas I have! I agree that their design has to be sensitive so that they don't end up being too obfuscating or too distracting, and I think that makes it interesting. The idea of having a fiddle on the screen is really interesting, I like it!

Simple desktop sprites sure can be good fun on their own! Sadly many of the desktop pets from their golden era are not compatible with modern OS, or are simply lost to the internets. But still we can hope for the rebirth of desktop pets as a popular thing. :) 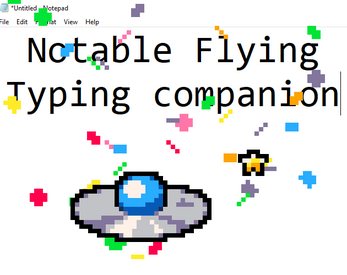